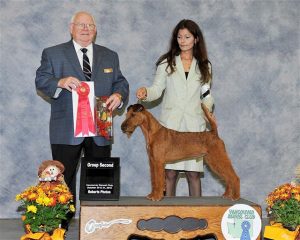 Head
Long, but in nice proportion to the rest of the body; the skull flat, rather narrow between the ears, and narrowing slightly toward the eyes; free from wrinkle, with the stop hardly noticeable except in profile. The jaws must be strong and muscular, but not too full in the cheek, and of good punishing length. The foreface must not fall away appreciably between or below the eyes; instead, the modeling should be delicate. An exaggerated foreface, or a noticeably short foreface, disturbs the proper balance of the head and is not desirable. The foreface and the skull from occiput to stop should be approximately equal in length. Excessive muscular development of the cheeks, or bony development of the temples, conditions which are described by the fancier as “cheeky,” or “strong in head,” or “thick in skull” are objectionable. The “bumpy” head, in which the skull presents two lumps of bony structure above the eyes, is to be faulted. The hair on the upper and lower jaws should be similar in quality and texture to that on the body, and of sufficient length to present an appearance of additional strength and finish to the foreface. Either the profuse, goat-like beard, or the absence of beard, is unsightly and undesirable.

Teeth
Should be strong and even, white and sound; and neither overshot nor undershot.

Lips
Should be close and well-fitting, almost black in color.

Nose
Must be black.

Eyes
Dark brown in color; small, not prominent; full of life, fire and intelligence, showing an intense expression. The light or yellow eye is most objectionable, and is a bad fault.

Ears
Small and V-shaped; of moderate thickness; set well on the head, and dropping forward closely toward the outside corner of the eye. The top of the folded ear should be well above the level of the skull. A “dead” ear, hound-like in appearance, must be severely penalized. It is not characteristic of the Irish Terrier. The hair should be much shorter and somewhat darker in color than that on the body.

Neck
Should be of fair length and gradually widening toward the shoulders; well and proudly carried, and free from throatiness. Generally there is a slight frill in the hair at each side of the neck, extending almost to the corner of the ear.

Shoulders and Chest
Shoulders must be fine, long, and sloping well into the back. The chest should be deep and muscular, but neither full nor wide.

Body
The body should be moderately long. The short back is not characteristic of the Irish Terrier, and is extremely objectionable. The back must be strong and straight, and free from an appearance of slackness or “dip” behind the shoulders. The loin should be strong and muscular, and slightly arched, the ribs fairly sprung, deep rather than round, reaching to the level of the elbow. The bitch may be slightly longer than the dog.

Hindquarters
Should be strong and muscular; thighs powerful; hocks near the ground; stifles moderately bent.

Stern
Should be docked, taking off about one quarter. It should be set on rather high, but not curled. It should be of good strength and substance; of fair length and well covered with harsh, rough hair.

Feet and Legs
The feet should be strong, tolerably round, and moderately small; toes arched and turned neither out nor in, with dark toenails. The pads should be deep, and must be perfectly sound and free from corns. Cracks alone do not necessarily indicate unsound feet. In fact, all breeds have cracked pads occasionally, from various causes.

Legs moderately long, well set from the shoulders, perfectly straight, with plenty of bone and muscle; the elbows working clear of the sides; pasterns short, straight, and hardly noticeable. Both fore and hind legs should move straight forward when traveling; the stifles should not turn outward. “Cowhocks”–that is, the hocks turned in and the feet turned out–are intolerable. The legs should be free from feather and covered with hair of similar texture to that on the body to give proper finish to the dog.

Coat
Should be dense and wiry in texture, rich in quality, having a broken appearance, but still lying fairly close to the body, the hairs growing so closely and strongly together that when parted with the fingers the skin is hardly visible; free of softness or silkiness, and not so long as to alter the outline of the body, particularly in the hindquarters. On the sides of the body the coat is never as harsh as on the back and quarters, but it should be plentiful and of good texture. At the base of the stiff outer coat there should be a growth of finer and softer hair, lighter in color, termed the undercoat. Single coats, which are without any undercoat, and wavy coats are undesirable; the curly and the kinky coats are most objectionable.

Color
Should be whole-colored: bright red, golden red, red wheaten, or wheaten. A small patch of white on the chest, frequently encountered in all whole-colored breeds, is permissible but not desirable. White on any other part of the body is most objectionable. Puppies sometimes have black hair at birth, which should disappear before they are full grown.

Size
The most desirable weight in show condition is 27 pounds for the dog and 25 pounds for the bitch. The height at the shoulder should be approximately 18 inches. These figures serve as a guide to both breeder and judge. In the show ring, however, the informed judge readily identifies the oversized or undersized Irish Terrier by its conformation and general appearance. Weight is not the last word in judgment. It is of the greatest importance to select, insofar as possible, terriers of moderate and generally accepted size, possessing the other various characteristics.

General Appearance
The over-all appearance of the Irish Terrier is important. In conformation he must be more than a sum of his parts. He must be all-of-a piece, a balanced vital picture of symmetry, proportion and harmony. Furthermore, he must convey character. This terrier must be active, lithe and wiry in movement, with great animation; sturdy and strong in substance and bone structure, but at the same time free from clumsiness, for speed, power and endurance are most essential. The Irish Terrier must be neither “cobby” nor “cloddy,” but should be built on lines of speed with a graceful, racing outline.

Temperament
The temperament of the Irish Terrier reflects his early background: he was family pet, guard dog, and hunter. He is good tempered, spirited and game. It is of the utmost importance that the Irish Terrier show fire and animation. There is a heedless, reckless pluck about the Irish Terrier which is characteristic, and which, coupled with the headlong dash, blind to all consequences, with which he rushes at his adversary, has earned for the breed the proud epithet of “Daredevil.” He is of good temper, most affectionate, and absolutely loyal to mankind. Tender and forebearing with those he loves, this rugged, stout-hearted terrier will guard his master, his mistress and children with utter contempt for danger or hurt. His life is one continuous and eager offering of loyal and faithful companionship and devotion. He is ever on guard, and stands between his home and all that threatens.

“The Irish Terrier is perhaps the finest dog on earth.  He does not throw away his priceless devotion and loyalty on every stranger who may chirp to him.  But to the death, he is the comrade, protector and exuberant playmate, and sympathizing comforter of the human who has won his heart and respect.  He is an Irish gentleman of the deathless old school; a fiery gentleman, from the tips of his braced toes to the rough thatch of his crown.  He is more.  He has a heart three sizes too big for his shaggy body; a heart that is as white and clean as that of a knight-errant.  He is no bully, but will flinch not one-hundredth of an inch from the fight that is forced on him, be the odds ever so impossible against him.  There is a psychic side of the Irish Terrier, too, found in almost no other dog  –  a tinge of the mysticism of the land of his ancestry.”